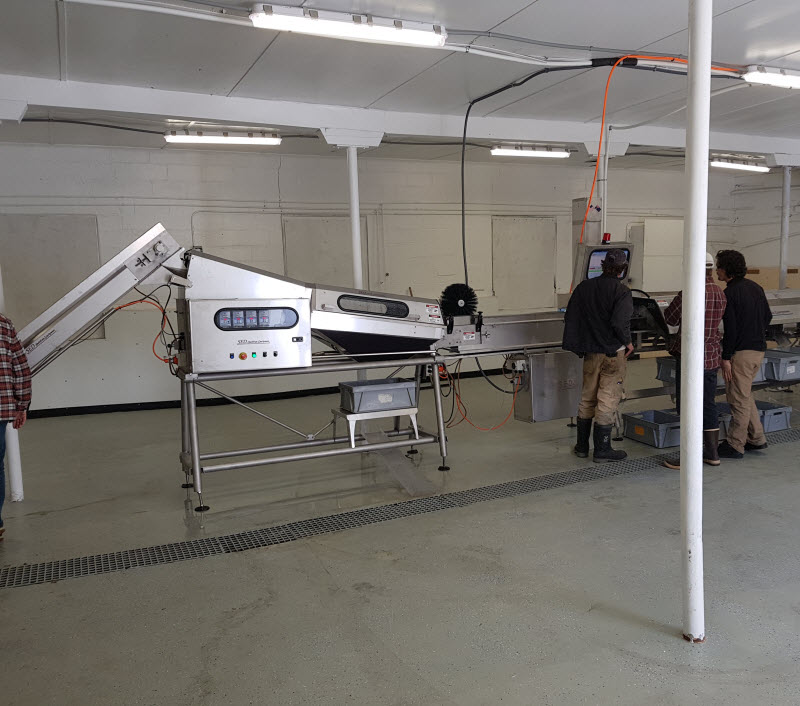 It’s no secret that grading the oysters is the most laborious and boring day on the oyster harvesting schedule. It’s also the day when farms experience a massive spike in grandmothers’ funerals, car breakdowns and a run of gastroenteritis spreading through the workforce. It’s labour intensive, expensive and understated in its value to the farm’s reputation and bottom line. Just imagine the advantages of automating your oyster grading line.

Our automated grading machine will grade up to 2700 dozen oysters per hour. Leon Riepsamen of Goodnight Oysters in NSW says, “What used to take three people two or three days to sort now takes me two hours to do on my own.”

The labour saving alone has a massive upside to any farm’s grading and sorting requirements. It takes about 13 experienced hand graders to match the speed and capacity of the automated grading machine.

The machine needs just one to three workers to inspect the oysters and change over bags or baskets. Additionally, the machine does not tire, call in sick or require a break. It will keep going as long as you want to keep going.

The automated grading machine is 99% count accurate. That is a far better consistency than hand grading and sorting.

Hugh Wheeler of Wheeler Oysters in NSW is so impressed, he states, “I couldn’t imagine being an oyster farmer without this machine. It is by far the best thing we have ever invested in.”

Gentle on oysters, SED Graders’ automated grading machine sorts the oysters using cushioned air. In trials, we pitted the machine against experienced hand graders and results illustrated that the machine graded oysters contained 4% more water than the hand graded oysters. Not only does the grading machine have superior accuracy, is faster and can be operated single handedly, the cushioned air system does not compromise the oyster in any way.

The automated grading machine has added advantages. Its capacity to separate, measure, sort, count and bag makes it the perfect addition to any oyster farm. Its versatility has been a major drawcard for many SED clients with a variety of ancillary equipment available to enhance the machine’s asset value as the farm’s production ebbs and flows. Feeders, inspection conveyors, washes, baggers and bulk handling additions are all bespoke engineered to fit seamlessly into the grading machine.

“The SED machine has taken our business to the next level. We needed to produce more oysters for less cost.” Max Lowe Ceduna South Australia.

The evidence and feedback from our clients highlight the success in the machine’s design and functionality, with every farm experiencing significant profitability. Hugh Wheeler from Wheeler Oysters saw real opportunity for the oyster farming community in the Merimbula region. Originally acquiring a machine for the advantages outlined here, he took the initiative, offering the use of the machine to neighbouring farms when he didn’t need it for his own operation. Wisely, the region’s farmers engaged with the idea. Before long, because of the consistency achieved, the region had a ‘brand’ of oyster that was identifiable, regardless of which farm it originated from. This created real interest in the market and each farm gained increased reputation and price as a regional oyster grower. It is this cooperation that has the potential to enhance the industry across all farming territories and not something SED had originally envisioned but is incredibly proud to be a contributor to.

The key benefits to our customers are clear, with exponential cost savings in labour and time. In these COVID times, the lack of skilled staff is another factor negatively influencing oyster farm grading efficiencies as well as land based farmers throughout Australia. Many farms are looking at alternate methods of combating staff shortages now and into the future. SED Graders’ vision grading machines tick many boxes for the oyster farming industry. The initiative demonstrated by Wheeler Oysters illustrates that co-op model oyster grading is well worth investigating. Sharing the investment and looking at innovative ways to market regional oysters into the mainstream is a sound consideration.

SED Graders’ maintenance division has recently expanded, with one of our senior technicians now operating from South Australia. This added resource has significantly increased our speed to mainland clients for breakdown and servicing needs. Feel free to contact us with any questions you may have and when you are considering a SED Graders vision grading machine.

With over 20 years in the industry, you can trust our machines and our team to deliver on our promises.